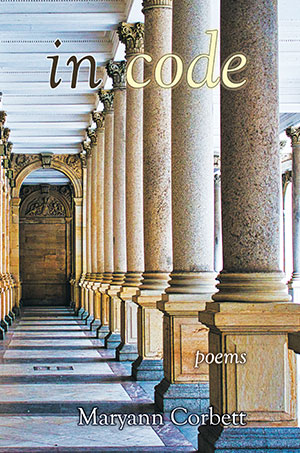 In Code
— Poems by Maryann Corbett

In Code was born out of Maryann Corbett’s years of work for the Minnesota Legislature, with a nonpartisan office that mandated that she maintain a public silence about politics. In poems that go from elegiac to fiery to funny, she examines behind-the-scenes legislative labor and the people who do it, the tensions of working for government in a climate hostile to government, and the buildings and grounds that put a beautiful face on a history full of ambiguities. This well-honed collection, Corbett's fifth, reflects on doublespeak and public poses; on coworkers and commutes; on legalese, courts, and elections; on news and history; and at last on retirement—through poems masterfully deployed in a dazzling array of forms: including the prose poem, the sonnet, the ghazal, the villanelle, and the canzone. Maryann Corbett is a candid, wistful, purposeful, and meditative poet in command of her craft.

Of her years working for the Minnesota Legislature, Maryann Corbett writes in Rattle: “There was the frisson supplied by the constant presence of the media, the satisfaction of believing one’s work served the public, the thrill of working with smart, motivated people, the pleasure of being surrounded by the striking buildings and gardens of the Capitol grounds, the sense of history. There was also the uncomfortable awareness that with every legislative session there are winners and losers, and that the same battles for justice are fought, and often lost, by the same people, year after year.”
In Code features poems that reflect on both those pleasures and that discomfort, as in these lines from "Seven Little Poems about Making Laws":

are restored to view
with bright applause. Old hatreds
have new objects now.

Ned Balbo:      . . . an extraordinary poet.
Tony Barnstone:  . . . metrical poetry infused with gorgeous imagery and the vernacular of our scientized world.
Richard Wilbur:  . . . accurate and delightful.
Rhina P. Espaillat:  . . . every section touches me and keeps calling me back.
A.M. Juster:    . . . wit without meanness, warmth without sentimentality, and craft without pretension.
Geoffrey Brock:    . . . one of the best-kept secrets of American poetry.
Marilyn Taylor:   . . . poignant, perceptive, exquisitely formed poems . . . a poet to be genuinely grateful for.
Peter Campion:  . . . a poet of the first order.
Willis Barnstone:   . . . a newborn Robert Frost, with a wicked eye for contemporary life.
Susan McLean:  . . . a stunner.

Maryann Corbett earned a doctorate in English in 1981, with a specialization in medieval literature and linguistics. She expected to be teaching Beowulf and Chaucer and the history of the English language. Instead, she spent almost thirty-five years working for the Minnesota Legislature, helping attorneys to write in plain English and coordinating the creation of finding aids for the law.
She is the author of five books of poetry and is a past winner of the Richard Wilbur Award and the Willis Barnstone Translation Prize. Her work is widely published in journals on both sides of the Atlantic and is included in anthologies like Measure for Measure: An Anthology of Poetic Meters and The Best American Poetry 2018.